The Czech postal administation is commemorating the 60th Anniversary of the death of Czech rocket pioneer Ludvík Ocenasek (pronounce: Ochenáshek) with a personalized stamp and a meter postmark slogan type of cancellation used at the Prague 12 post office.

Ludvik Ocenasek was born into a poor mining family in Bohemia, Austria-Hungary (now the Czech Republic) in 1872. He taught himself to be a mechanic, and while working at that trade, succeeded in completing his education in a middle vocational school. At the age of 22, after working in a patent office, he opened his own machine shop in Prague, which in time grew into a medium sized industrial plant.

Creativity marked Ocenasek's entire life, from the merry-go-round he designed and constructed at the age of eight, to the recoil device for firearms for which a patent was awarded to him two days after his death.

In 1905, Ocenasek designed and built an aeronautical rotary engine similar to the famous French Gnome airplane engine. In 1910, he built a monoplane powered by a 50-horsepower rotary engine he had also invented, and on November 30, 1910, he flew it almost 100 feet, a considerable distance at the time.

Inspired by reports of successful rocket experiments performed by Dr. Robert Goddard, engineer Max Valier, and professor Herman Oberth, with whom he corresponded, Ludvik Ocenasek turned his creative endeavors to rocketry and jet propelled boats, beginning systematic rocket research in 1928. He hoped to use liquid propellants such as alcohol or hydrogen and oxygen, advocated by both Goddard and Oberth, but ultimately used solid propellants instead. One of Ocenasek's ultimate goals was to utilize rockets for delivering postal mail via high altitude trajectories between continents.

On March 2, 1930, in a field near Prague, Czechoslovakia, Ocenasek held his largest public demonstration, launching a variety of rockets. One of his two-stage rockets reached 4,700 feet, a remarkable altitude for rockets at that time. All of these rockets were propelled by gunpowder. He also developed a ground-launching apparatus to aid in overcoming obstacles in rapid rocket acceleration.

Ocenasek later tried out reaction propulsion on riverboats, and even envisaged rockets launched from aircraft, the principle used half a century later by Orbital Sciences Corporation for their Pegasus launcher. If not for the Nazi occupation of Czechoslovakia in 1939, his research would have undoubtedly developed more innovative products and techniques. Ludvik Ocenasek died on August 10, 1949. Asteroid 61404 Ocenasek is named in his honor.

To obtain one of the cacheted covers produced on this occasion, contact Julius Cacka at julius@atlas.cz 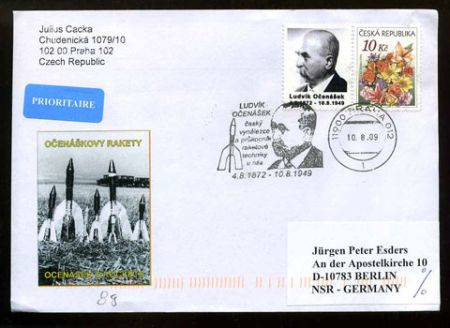